History of the Lake

At the turn of the century, the Rocky River valley was a quiet, productive farming community nestled in the foothills of the Berkshire Mountains. On July 15, 1926, a decision was made that would change the face of the valley forever. On that date the Connecticut Light and Power Company's Board of Directors approved a plan to create a lake for the purpose of producing electric power.

The plans moved forward quickly and the company bought the valley land and built several dams to contain the water, the largest at the north end measured 100 feet high and 952 feet wide. On February 25, 1928, the fill-up began and in a mere seven months, Candlewood Lake was born.

Countless arrowheads as well as spearheads, mallets, war axes, adzes, bits of pottery and other implements, washed ashore or unearthed during early excavations, reveal some of the story of the land now submerged by Candlewood Lake. Abundant wildlife made it a hunting ground for Chief Waramaug and his tribesmen. His was mostly a refugee group from the Pequots, Algonquins, Iroquois, Narragansetts and other tribes. Lake Waramaug, located a few miles to the Northeast, honors his name.

Squantz Pond State Park in New Fairfield was named for Chief Squantz of the Schaghticoke Indians who lived near this natural body of water now separated from the lake by a causeway. Many years ago, the remains of a Native American canoe over 22 feet long and 5 ½ feet wide was raised from the bottom. Was Squantz Pond once much larger than it is today? The size of this mystery canoe leads to speculation.

In 1724 twelve men came from Fairfield, one of the early Connecticut settlements, to offer Chief Squantz a deal to purchase a large tract of land the tribe retained from an original grant. According to legend, the Chief agreed to the deal and the men returned home to prepare the deed. Today, Fairfield is only an hours drive from New Fairfield, but the men were unable to return until the following spring.

When they arrived they found Chief Squantz had died and his four sons refused to honor the contract. It took five years of negotiating before the Native Americans agreed to the settlers purchase offer. In 1729 the deed was stuck for and in consideration of sixty-five pounds (about $300). Perhaps inflation was already beginning to set in when we recall that about 100 years earlier Peter Minuit purchased the island of Manhattan for 60 Dutch guilders (about $24).

Most of the future lake area was included in the land transferred by this deed. The land was described as eight miles in length, and is bounded east on the township of New Milford and the Ousetoneck (Housatonic) River, west on land under the government of New York, south on Mitchells purchase, so call, it being a part of said New Fairfield and north on granted lands of the government.

A year later the Native Americans had moved north to the Kent area, and settlers began to build cabins in the new township. They soon learned of a Native American substitute for wax candles made by splitting the inner core of pine logs, filled with pitch and turpentine, into narrow eight-inch strips which burned like small torches. The best pine for this candle wood was plentiful on the mountain dominating the northern horizon of the present lake, and it came to be known as Candlewood Mountain.

The birth of our lake 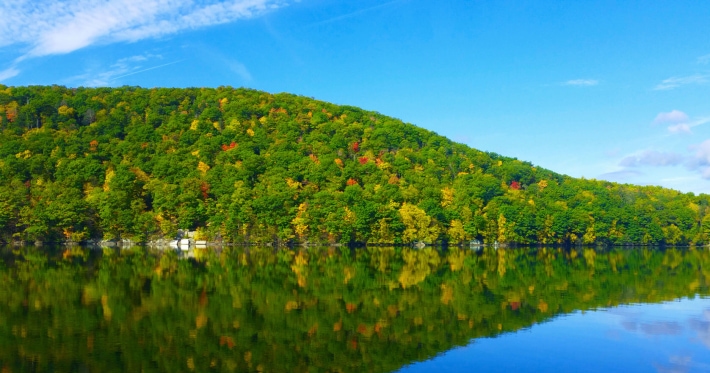 When the lake was formed the name was again an agreeable choice. The 1930 population of New Fairfield, with about half of the lakes acreage, was only 434. Danbury, then the leading hat making city in the country, had 26,955, and the other bordering towns had the following: Sherman, 391; Brookfield, 926; and new Milford 4,700. To avoid favoring any town, the lake was named Candlewood. With the exception of Danbury, the numbers for adjoining towns were declining in 1930, but by 1980 the combined population had more than tripled, with greater growth in the towns other than Danbury.

Before being flooded, the Rocky River was a meandering Housatonic tributary, draining ponds in the south and traveling north in and out of rocky ridges to join the Housatonic north of the center of New Milford. Even in colonial days the Rocky River's sudden drop of about 200 feet was recognized as an important resource, and it was harnessed to furnish power for several mills.

What name is no longer on the map? It is Jerusalem, once a small farming village in the Rocky River valley about four miles from its mouth, which also had mills in its early days. The waters of the lake now flow over the farmlands and homesteads of Jerusalem. They also flow over the tobacco fields and cattle pastures of other farms contained in the original basin.

To no surprise, the old mill right at the mouth of the Rocky River attracted new attention in 1900 when the use of hydroelectric power generation was expanding. The Bulls Bridge plant was built in 1904, and three years later the Connecticut Light and Power Company, staked its claim by acquiring title to the site where the dam for Candlewood Lake is now located.

When the plan to create a pumped water storage reservoir and build the Rocky River plant proceeded in 1926, all the valley land below the contour line 440 feet above sea level was targeted as lake land. The company contracted the 35 families living in the area to be flooded. Though the company had the power of eminent domain they bargained with the families and paid fair pre-lake prices. It seems unlikely either the inhabitants or the company envisioned the future land values surrounding the yet unfilled lake. Only a few individuals refused to sell, so some property inundated by the lake is still privately owned.

A total of 5,520 acres of lake basin had to be prepared and included were four ponds: Squantz, Barse and Creek in New Fairfield, and Neversink overlapping the Danbury-New Fairfield line. The latter did never sink but was drowned by the lake. In the clearing operation about 100 building of various sorts, including schools and churches, were demolished or moved. Workers were paid $1 per body to remove gravestones and remains from small cemeteries for reburial.

Jerusalem residents were not the only ones who once lived at the bottom of the lake. Large crews of Maine and Canadian woodsmen temporarily lived in four workcamps throughout the basin, and together with local men they chopped down timber and brush below the 440 contour with only muscle power. The wood was free for the carting, but most of it was burned with fires often blazing day and night. There was a rumor that the most unwieldy trees were chained to the bottom and left to let nature take its course.

400 men and the building of the dam

Construction of the plant, dam and smaller dikes to build up the low points was carried out by the U.G.I. Contracting Company of Philadelphia. A construction camp with quarters for 400 men was set up near the proposed dam. This temporary village had four bunkhouses, a bath house, store, bank, bakery and barbershop, all placed along facetiously named streets. Locally the camp was known as UGI-ville. In about 17 months time some 920 men completed the entire job at a cost of $5,000,000, a bargain even in 1920s currency.

Pumping Housatonic water up through the 13 ft. diameter penstock started on February 25, 1928. By the end of the year it reached 429 feet above sea level and the plant went into operation. For many people the pump storage reservoir was a spin-off asset of more personal interest. This was the new body of water with an 85-foot maximum depth, an average depth of 29.3 feet and 61 miles of shoreline along fringes of hills with numerous coves and islands that we now know as Candlewood Lake. 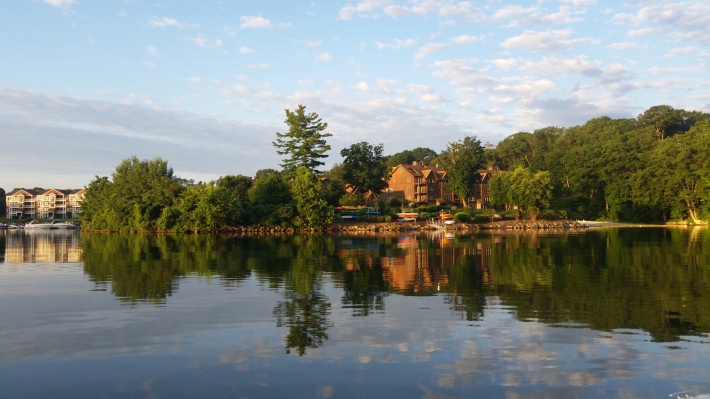 In the New York Sun on May 20 1931, Klark K. Kitchen, a journalist who prided himself on having visited almost all of the famous lakes in the world, described Candlewood as one of the five or six most beautiful lakes he had ever seen.

Even early real estate developers did not dream what would happen to Connecticut's largest lake. Land was often sold for a few hundred dollars in 50-foot plots for modest summer cottages. But now the decades of development are there for all to see - over a thousand substantial homes with well maintained lawns and gardens, some of which have been featured in major magazines. While most of these waterfront homes are used year round, some receive part time or seasonal use. It is also staggering to contemplate how in an area that is considered by the CT Department of Environmental Protection to be marginally suited for on-site sewage treatment (septic systems), the Candlewood Lake watershed is riddled with private wells and septic systems.

Environmental impact statements were unheard of when the lake was created, but concern about lake quality is now urgent for all who live on Candlewood Lake and in its watershed area.

In the early days the lake was so clear that old stone walls along the bottom were visible.  We may never see the water quality of the 1950s again, but we may be able to prevent further serious degradation and even improve the current state of water quality on Candlewood Lake with the cooperation of those who enjoy the lake. People who regard Candlewood Lake as a substantial asset can help to preserve it by giving the lake and watershed the respect and enlightened attention it needs and deserves.